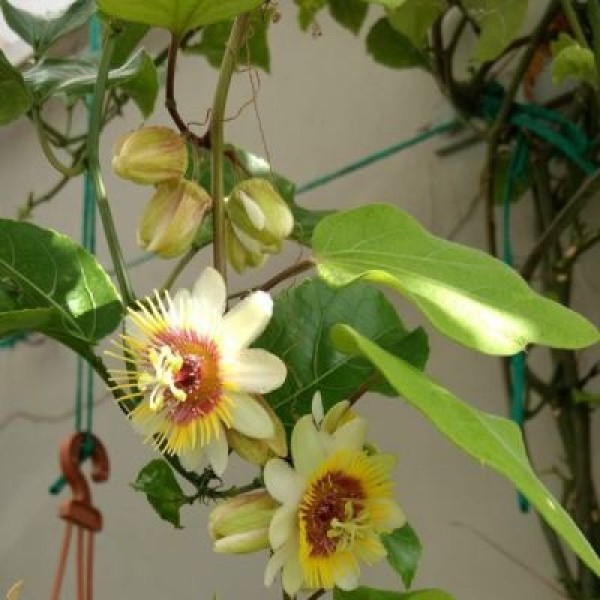 Passiflora, known also as the passion flowers or passion vines, is a genus of about 500 species of flowering plants, the namesakes of the family Passifloraceae. They are mostly vines, with some being shrubs, and a few species being herbaceous. For information about the fruit of the passiflora plant, see passionfruit. The monotypic genus Hollrungia seems to be inseparable from Passiflora, but further study is needed.

Ecology
The passion flowers have a unique structure, which in most cases requires a large bee to effectively pollinate. In the American tropics, wooden beams are mounted very near passionfruit plantings to encourage carpenter bees to nest. The size and structure of flowers of other Passiflora species is optimized for pollination by hummingbirds (especially hermits like Phaethornis), bumble bees, wasps or bats, while yet others are self-pollinating. The Sword-billed Hummingbird (Ensifera ensifera) with its immensely elongated bill has co-evolved with certain passion flowers, such as P. mixta.

Yellow Passion Flower (P. lutea) pollen is apparently the only pollen eaten by the unusual bee Anthemurgus passiflorae. However, these bees simply collect the pollen, but do not pollinate the flowers.

The leaves are used as food plants by the larva of a number of lepidoptera. To prevent the butterflies from laying too many eggs on any single plant, some passion flowers bear small colored nubs which resemble the butterflies' eggs and seem to fool them into believing that more eggs have already been deposited on a plant than actually is the case. Also, many Passiflora species produce sweet nutrient-rich liquid from glands on their leaf stems. These fluids attract ants which will kill and eat many pests that they happen to find feeding on the passion flowers.

Medicinal
Passiflora incarnata (maypop) leaves and roots have a long history of use among Native Americans in North America and were adapted by the European colonists. The fresh or dried leaves of maypop are used to make a tea that is used for insomnia, hysteria, and epilepsy, and is also valued for its analgesic properties. P. edulis (passion fruit) and a few other species are used in Central and South America for similar purposes. Once dried, the leaves can also be smoked.

The medical utility of only a few species of Passiflora has been scientifically studied. In initial study in 2001 for treatment of generalized anxiety disorder, maypop extract performed as well as oxazepam but with fewer short-term side effects. It was recommended to follow up with long-term studies to confirm these results.

A study performed on mice, it was shown that Passiflora alata has a genotoxic effect on cells, and further research was recommended before this one species is considered safe for human consumption.