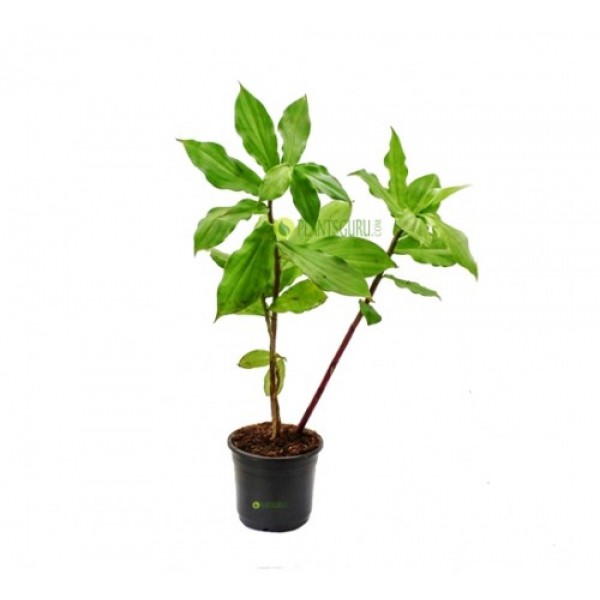 Costus igneus, common name Fiery Costus or Spiral Flag, is a species of herbaceous plant in the Costaceae family native to Brazil. The plant grows very quickly. And the propagation is by stem cutting. It needs sunshine but it also grows in slightly shady areas. This plant has large fleshy looking leaves. The undersides of these large, smooth, dark green leaves have light purple shade. The leaves are spirally arranged around the stem, forming attractive, arching clumps arising from underground rootstocks. The maximum height of these plants is about two feet. The flowers are orange in color and are beautiful, 1.5-inch diameter. Flowering occurs during the warm months. And they appear to be cone-like heads at the tips of branches. It is also possible to consume the leaves by drying and grinding powder of the leaves.

Cultivation
Costus igneus belongs to the Costaceae family. In Siddha medicine, it is known as Kostum. It is being cultivated in Kashmir and the Himalayan regions for its root. It is related to the gingers and was originally part of the Zingiberaceae family. But now the Costus species have been reclassified into their own family, Costaceae. The species reproduces vegetative by rhizome and birds disperse seeds when they feed on the fruits. Costus products are sometimes called Costus comosus and are edible in nature. The flower petals are quite sweet and nutritious. It's a lower grower and makes a great ground cover. The long red flower spikes of Costus pulverulentus are unique to the family and they are sure to create interest in the garden.

Costus does not seem to have much of a problem with pests and diseases. Out in the garden plant might sometimes be chewed by caterpillars, and in indoors plant might be affected by red spider mite. Costus speciosus or crape ginger is possibly the best known cultivated species of the genus Costus. This plant is native to Southeast Asia, especially on the Greater Sunda Islands in Indonesia. Costus differs from the common ginger by having only one row of spirally arranged leaves.

It is cultivated in India for its use in traditional medicine and elsewhere as an ornamental.

Disclaimer: This page presents a description and history of the medicinal uses of these plants. The intention is not to provide specific medical advice. You should consult your personal physician before taking any form of medication

Stevia Rebaudiana If growing your own calorie-free, natural sweetener sounds too good to be true, it’s time to get to know stevia. Native to Paraguay and other tropical areas of the Americas, the stevia plant (Stevia rebaudiana) produces leaves packed with super-sweet compounds that remain stable even after the leaves have been dried. Stevia leaves have been used to sweeten teas and beverages throughout South America for centuries. More recently, diabetics and dieters alike have turned to..

Gurmar is found in dry deciduous forests of India and is also called Madhunasini / Gudmar whereas, in Sanskrit, it is called Mehashringi. The leaves are simple opposite and ovate-elliptic. The flowers are yellow in colour. It grows as a woody climber. It roots at the nodes. Leaves and roots are used medicinally. The name itself signifies as it kills sugar. Hence, popularly Gudmar is known as ‘the insulin plant’. The plants are available in nurseries and the tablets of this are prepar..