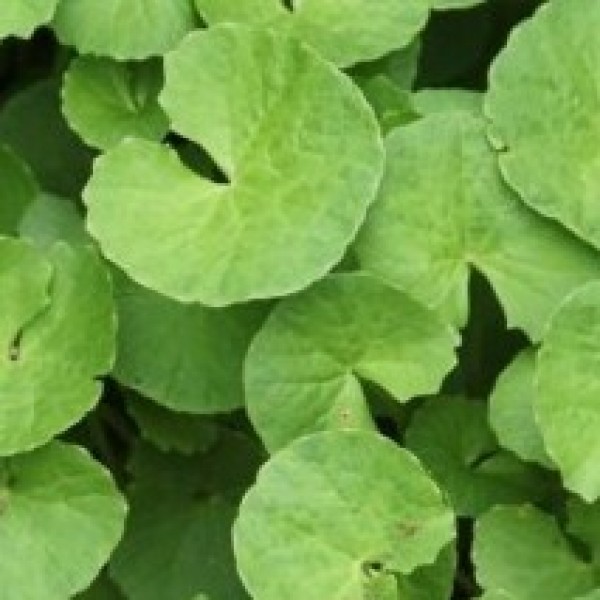 Centella asiatica, commonly known as centella and gotu kola, is a small, herbaceous, annual plant of the family Mackinlayaceae or subfamily Mackinlayoideae of family Apiaceae, and is native to wetlands in Asia. It is used as a medicinal herb in Ayurvedic medicine, traditional African medicine, and traditional Chinese medicine. It is also known as the Asiatic pennywort or Indian pennywort in English, among various other names in other languages.

Description
Centella grows in tropical swampy areas.The stems are slender, creeping stolons, green to reddish-green in color, connecting plants to each other. It has long-stalked, green, rounded apices which have smooth texture with palmately netted veins. The leaves are borne on pericladial petioles, around 2 cm. The rootstock consists of rhizomes, growing vertically down. They are creamish in color and covered with root hairs.

The flowers are white or pinkish to red in color, born in small, rounded bunches (umbels) near the surface of the soil. Each flower is partly enclosed in two green bracts. The hermaphrodite flowers are minute in size (less than 3 mm), with 5-6 corolla lobes per flower. Each flower bears five stamens and two styles. The fruit are densely reticulate, distinguishing it from species of Hydrocotyle which have smooth, ribbed or warty fruit. The crop matures in three months, and the whole plant, including the roots, is harvested manually.

Medicinal effects
According to the American Cancer Society, although centella is promoted for its health benefits, "available scientific evidence does not support claims of its effectiveness for treating cancer or any other disease in humans". However some research has shown a possible health benefit in the form of reduction of the progression of subclinical arterial lesions in low-risk asymptomatic subjects.

In India, particularly, it is popularly known by a variety of names: bemgsag, brahma manduki, brahmanduki, brahmi, ondelaga or ekpanni (south India, west India), sarswathi aku (Andhra Pradesh), gotu kola, khulakhudi, mandukparni, mandookaparni, or thankuni (Bengal), depending on region. Bacopa monnieri is the more widely known Brahmi; both have some common therapeutic properties in Vedic texts and are used for improving memory. C. asiatica is called brahmi particularly in north India, although that may be a case of mistaken identity introduced during the 16th century, when brahmi was confused with mandukaparni, a name for C. asiatica. Probably the earliest study of mandookaparni as medya rasayana (improving the mental ability) was carried out at the Dr. A. Lakshmipathy Research Centre (now under CCRAS).