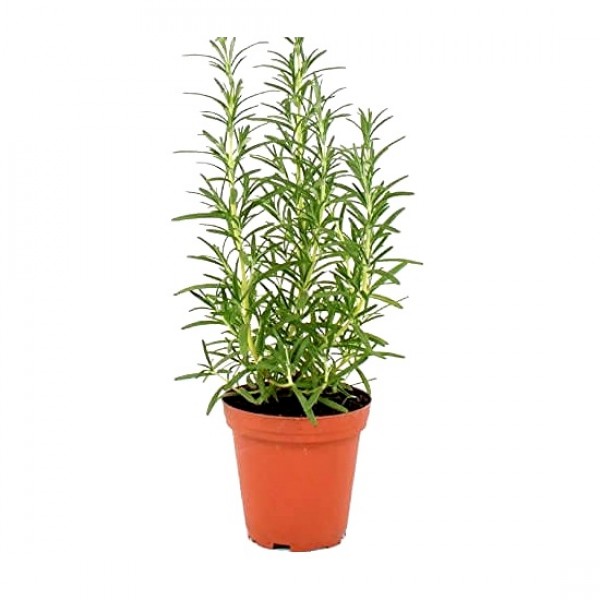 Rosmarinus officinalis, commonly known as rosemary, is a woody, perennial herb with fragrant, evergreen, needle-like leaves and white, pink, purple, or blue flowers, native to the Mediterranean region. It is a member of the mint family Lamiaceae, which includes many other herbs. The name "rosemary" derives from the Latin for "dew" (ros) and "sea" (marinus), or "dew of the sea". The plant is also sometimes called anthos, from the ancient Greek word, meaning "flower". Rosemary has a fibrous root system.

Description
Rosemary is an aromatic evergreen shrub that has leaves similar to hemlock needles. The leaves are used as a flavoring in foods such as stuffings and roast lamb, pork, chicken and turkey. It is native to the Mediterranean and Asia, but is reasonably hardy in cool climates. It can withstand droughts, surviving a severe lack of water for lengthy periods. Forms range from upright to trailing; the upright forms can reach 1.5 m (5 ft) tall, rarely 2 m (6 ft 7 in). The leaves are evergreen, 2–4 cm (0.8–1.6 in) long and 2–5 mm broad, green above, and white below, with dense, short, woolly hair. The plant flowers in spring and summer in temperate climates, but the plants can be in constant bloom in warm climates; flowers are white, pink, purple or deep blue.

Mythology
According to legend, it was draped around the Greek goddess Aphrodite when she rose from the sea, born of Uranus's semen. The Virgin Mary is said to have spread her blue cloak over a white-blossomed rosemary bush when she was resting, and the flowers turned blue. The shrub then became known as the 'Rose of Mary'.

Usage
Rosemary is used as a decorative plant in gardens and has many culinary and medicinal uses. The plant is said to improve the memory. The leaves are used to flavor various foods, such as stuffings and roast meats.

Rosemary is a perennial evergreen shrub with blue flowers. It is a pungent and distinctive plant with a sweet, resinous flavor. Rosemary is ideal for a rock garden or the top of a dry wall. It is used for poultry, lamb, stews, and soups. Rosemary is one of those wonderful herbs that makes a beautiful ornamental plant as well as a welcome culinary seasoning. Its Latin name, Rosmarinus officinalis, means "dew of the sea" and rosemary is most closely associated with the cooking of the Mediterranean area. However you don't need perfect sunshine, sea mist or even a never ending summer to successfully grow rosemary. In fact, more rosemary plants suffer from too much attention than from too little.